Cops and No Counselors: South Dakota

In the wake of high-profile school shootings, many schools over the past decade have invested scarce educational funds into putting more police in schools. School districts have shown a near obsession with “hardening” schools despite federal data revealing that the real crisis of schools isn’t violence, but a broad failure to hire enough support staff to serve students’ mental health needs.

Today’s students are experiencing record levels of depression and anxiety and many forms of trauma. According to the Centers for Disease Control and Prevention, the suicide rate among children ages 10 to 17 increased by 70 percent between 2006 and 2016. Approximately 72 percent of children in the United States will have experienced at least one major stressful event — such as witnessing violence, experiencing abuse, or experiencing the loss of a loved one — before the age of 18.

School counselors, nurses, social workers, and psychologists are frequently the first to see children who are sick, stressed, or traumatized — especially in low-income districts. The benefits of investing in mental health services are clear: Schools with such services see improved attendance rates, better academic achievement, and higher graduation rates as well as lower rates of suspension, expulsion, and other disciplinary incidents. Data shows that the presence of school-based mental health providers not only improves outcomes for students, but can also improve overall school safety.

By contrast, there is no evidence that increased police presence in schools improves school safety. Indeed, in many cases, it causes harm. When in schools, police officers do what they are trained to do, which is detain, handcuff, and arrest. This leads to greater student alienation and a more threatening school climate.

The glaring deficit of mental health staff in schools is inexcusable, especially given the growing use of law enforcement in schools. This dangerous combination is a central reason the most vulnerable students are being funneled into the school-to-prison pipeline. In South Dakota, Native American students are 8 times more likely to be arrested in school versus their White peers. Additionally, persons with disabilities are nearly 5 times more likely to be arrested.

47 states, including the state of South Dakota, and D.C. don't meet the recommended student-to-counselor ratio

Given the clear benefits of investing in school mental health resources, it would make sense for school boards, school principals, and government leaders to be using every available resource to increase school-based health professionals. Yet, that has not been the trend. Instead, funding for police in schools has been on the rise, while public schools face a critical shortage of counselors, nurses, psychologists, and social workers.

As this report reveals, thousands of students are in South Dakota schools with law enforcement but no support staff:

Even schools offering some mental health services are still grossly understaffed. Professional standards recommended at least one counselor and one social worker for every 250 students and at least one nurse and one psychologist for every 750 students and every 700 students respectively. These staffing recommendations reflect a minimum requirement.

Nonetheless, our report shows that 83% percent of students are in South Dakota public schools that fail to meet these standards. Yet in those schools with a significant lack of health support staff, law enforcement presence is flourishing. Many states reported two to three times as many police officers in schools as social workers. Five states reported more police officers in schools than nurses.

The consequences for these funding decisions fall on the most vulnerable students. Historically marginalized students — such as students of color — often have to attend schools with fewer resources and supports, and teachers are often not equipped to deal with the special needs of children with disabilities. When there are no other support staff to address behavioral problems, some teachers request help from law enforcement.  This results in an increased criminalization of school children: We found that schools with police reported 3.5 times as many arrests as schools without police. As a result, students with disabilities and students of color are frequently sent into the criminal system. 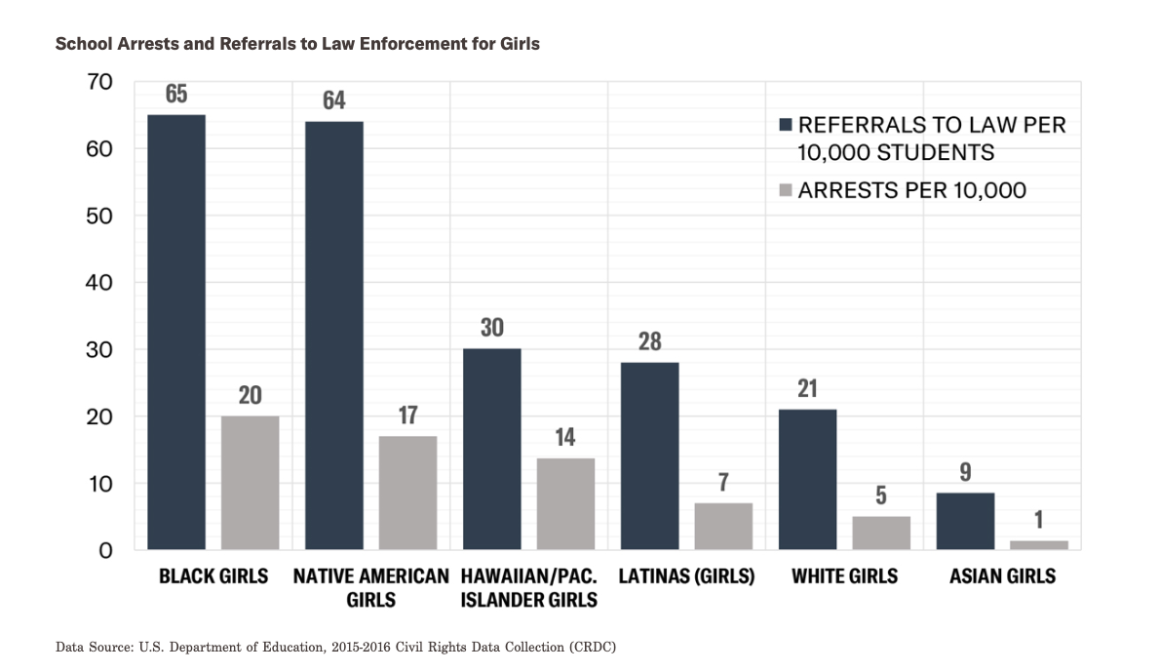 According to the Centers for Disease Control, the suicide rate among children ages 10 to 17 increased by 70 percent between 2006 and 2016. It is estimated that nearly 35 million children in the U.S. have experienced at least one event that could lead to childhood trauma. About 72 percent of children in the U.S. will have experienced at least one traumatic event such as witnessing violence, experiencing abuse, or experiencing the loss of a loved one before the age of 18.

The majority of mental health needs first emerge during adolescence and are most effectively treated during this period. The data suggestes 1 in 5 youth will develop mental health difficulties, eventually warranting a diagnosis, and 1 in 10 youth will be affected by their mental health needs enough to require additional support services from schools. These mental health concerns can have serious impacts on students as they progress through school, and it contributes to nearly half of the youth eventually dropping out.

Up to 80 percent of youth in need of mental health services do not receive services in their communities because existing services are inadequate. Of those who do receive assistance, 70 to 80 percent of youth receive mental health care in their schools. Students are 21 times more likely to visit school-based health centers for mental health than community mental health centers. This is especially true in low-income districts where other resources are scarce. Therefore, school-based mental health providers (SBMH providers) — such as school counselors, nurses, social workers, and psychologists — are frequently the first to see children who are sick, stressed, traumatized, or hurt themselves or others.

No data indicates that police in schools improve student safety, student educational outcomes, or student mental health. For example, a recent evaluation of the impact of North Carolina’s state grant program for school-based police officers (called school resource officers) concluded that middle schools that used state grants to hire and train SROs did not report reductions in serious incidents like assaults, homicide, bomb threats, possession and use of alcohol and drugs, or the possession of weapons. In fact, there is some evidence suggesting that the SRO presence actually harms youth.

Increased police presence in schools results in an expansion in the types of roles police play in schools, an increase in student referrals to police, an increase in student arrests, and accountability problems from student-police contact. The presence of police shifts the focus from learning and supporting students to over-disciplining and criminalizing them. Students are removed from classes, subjected to physical restraint, interrogation, and other risks to their rights to education, due process, and equal treatment.

Data from the National Center for Education Statistics also indicates a racial disparity in the effect of police in schools. Police in schools with predominantly students of color are significantly more likely to focus on maintaining school discipline compared to police in predominately white schools, while being less likely to coordinate with emergency teams in the presence of an actual threat.

Moreover, law enforcement officers are often not qualified to work with children. Roughly 25 percent of school police surveyed by Education Week stated that they had no experience with youth before working in schools. Police are trained to focus on law and order, not student social and emotional well-being. This lack of training undermines effective behavior management. The tools of law enforcement — pepper spray, handcuffs, tasers, and guns — are ill-suited to the classroom. A 2018 report by the Advancement Project documented and mapped over 60 instances of police brutality in schools over the past eight years.

The use of police in schools has its roots in the fear and animus of desegregation. Students of color are more likely to go to a school with a law enforcement officer, more likely to be referred to law enforcement, and more likely to be arrested at school. Research also demonstrates that students who attend schools with high percentages of Black students and students from low-income families are more likely face security measures like metal detectors, random “contraband” sweeps, security guards, and security cameras, even when controlling for the level of misconduct in schools or violence in school neighborhoods. 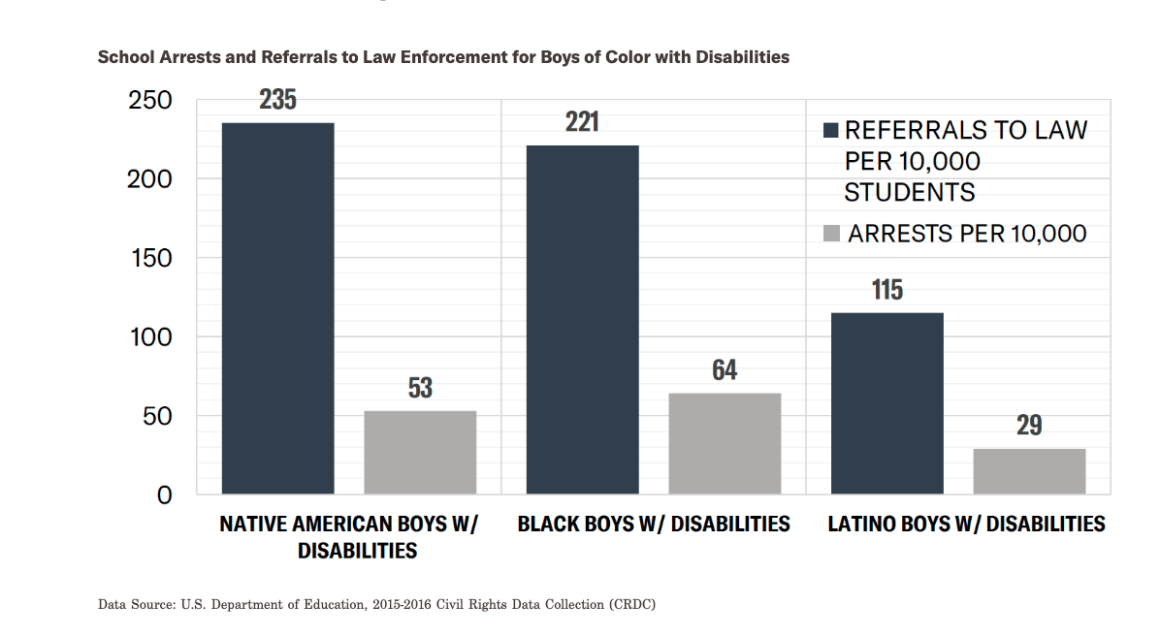 Know Your Rights: When Stopped by Police

From Punishment to Promise: The Power of Redemption

Police Divestment Efforts Must Include Universities